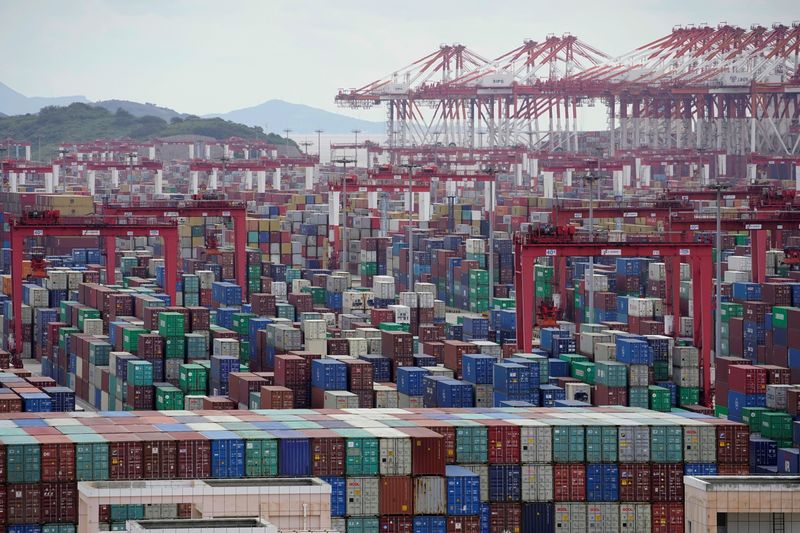 By Jonathan Saul and Eduardo Baptista

LONDON/HONG KONG (Reuters) – Ships in Chinese waters are disappearing from tracking systems following the introduction of a new data law in China, frustrating efforts to ease bottlenecks that are snarling the global economy, according to three shipping sources directly impacted.

China’s Personal Information Protection Law, which came into effect on Nov. 1, has added to a raft of new rules designed to increase government control over how domestic and foreign organisations collect and export China’s data.

Although there are no specific guidelines on shipping data in the regulations some domestic providers in China have stopped giving information to foreign companies as a direct consequence of the new rules, the sources told Reuters on Wednesday.

The data is relied upon to provide information on cargo volumes and helps optimise logistics by predicting congestion so companies can make key decisions on shipping routes.

MarineTraffic, a top global provider of ship tracking and maritime intelligence, is among those foreign companies now experiencing gaps in vital shipping location data from China, where much of the world’s supply of manufactured goods and some industrial commodities come from.

“If this continues, there will be a big impact in terms of global visibility especially as we come into the busy Christmas period with supply chains already facing huge problems all over the world,” said Anastassis Touros, AIS network team leader at MarineTraffic.

“All of a sudden we do not know when ships are leaving and from where, and we also don’t have the full picture on port congestion which AIS offers us.”

The so-called Automatic Identification System (AIS) provides the locational positions on ships. It is used by other vessels, ports, and many other organisations from banks and traders to search and rescue operations.

From Oct. 28 to Nov. 15 the level of terrestrial shipping data across all Chinese waters was estimated to have dropped 90% according to market intelligence and valuations provider VesselsValue.

“With China being a major importer of coal and iron ore and one of the main container exporters globally, this decline in positional data could cause significant challenges concerning ocean supply chain visibility,” head trade analyst Charlotte Cook said.

Two other sources put the drop in terrestrial AIS data at up to 45% in recent days.

Other Chinese officials did not immediately respond to requests for comment.

A spokesperson with U.N. agency the International Maritime Organization, which adopted global AIS regulations, had no comment when contacted.

The AIS information is taken from continuous transmissions and although it can be collated using satellite data, for heavily congested areas or places where frequent updates are needed, terrestrial data is required.

It was unclear how AIS users will be able to keep tabs on shipping movements if the data gaps continue.

The lack of tracking capability comes at a time when COVID-19 has already exposed the fragility of global supply chains used for everything from food to fashion.

The surge in demand for goods and shortage of containers has created port disruptions https://www.reuters.com/business/autos-transportation/containergeddon-supply-crisis-drives-walmart-rivals-hire-their-own-ships-2021-10-07 around the world, which makes the AIS data even more important to determine schedule times for shipments from key suppliers in China.

Mainland China is home to six of the world’s ten largest container ports.

An employee at Elane Inc, a Beijing-based company that owns an AIS data platform with around 2.5 million users, told Reuters that “all dealings with foreign entities were recently halted”.

“The changes happened last month, we only supply data to domestic users now,” said the employee, who asked not to be identified.

Jamaican & Chinese Cuisines Have More in Common Than You Think

Is it Okay to Store Popcorn in the Refrigerator?

Jamaican & Chinese Cuisines Have More in Common Than You Think

Is it Okay to Store Popcorn in the Refrigerator?

Key Reasons You NEED a Cake for a Birthday Party