By building a network that ensures lightning-fast deliveries and other conveniences, Missfresh Limited (NASDAQ:MF) beat analysts’ expectations with its third-quarter earnings report. The grocery chain, which currently has a $1.2 billion valuation, is expanding aggressively in its home country of China. While it’s still generating net losses, various metrics are improving, and there are at least three reasons a bullish scenario could play out in the coming quarters and years.

1. The company is harnessing technology for convenience

Missfresh, a seller of fresh groceries and related consumer goods, is making a mix of digital and physical retail the centerpiece of its strategy, using what it calls a distributed mini warehouse (DMW) business model. Like a restaurant chain using “dark kitchens” with no retail restaurant counter or dine-in facilities to fulfill delivery orders in the immediate area, Missfresh’s “dark stores” use a delivery-only model. Also dubbed micro fulfillment centers, the DMWs distribute grocery supplies across the 17 cities Missfresh operates in, enabling extremely fast delivery. 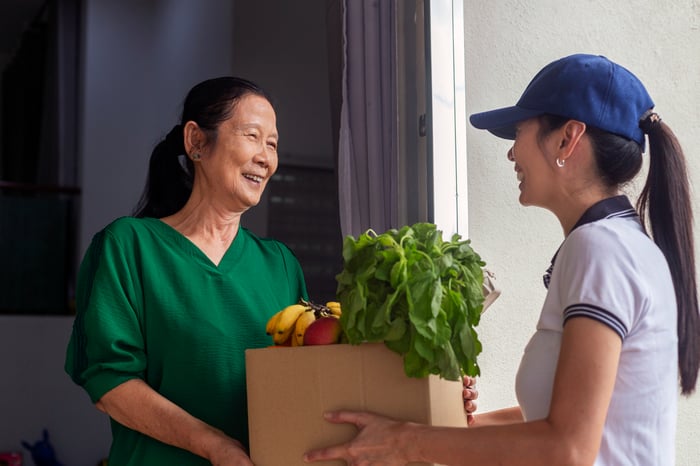 During the company’s Nov. 11 earnings call, founder and CEO Zheng Xu claimed the DMWs are “offering over 5,000 SKUs and a delivery time of 36 minutes on average per order.” The model is intended to appeal to the “more convenient and high-quality lifestyle” Chinese middle-class shoppers are seeking, according to Xu. In an effort to boost quality and freshness, the company obtains its food items directly from 350 factories and 200 farms, all located in China.

The company also has a paid membership program that expanded 800% year over year during the quarter. And in addition to direct sales to individuals, the company is selling to small- and medium-sized brick-and-mortar grocery stores, making it a wholesale supplier in addition to an on-demand retailer. Its retail cloud aims to provide these grocers with “omnichannel marketing, private traffic, supply chain, and last-mile fulfillment capabilities” without the need to develop these complex, expensive systems themselves. Thus, Missfresh has positioned itself to benefit from both the retail and wholesale sides of the business with its rapid, digitally-enabled ordering and delivery.

2. It’s operating in a favorable environment

Several trends currently underway in China are providing Missfresh with rich soil in which to grow. The Chinese economy is booming with research from consulting firm McKinsey & Co. showing the country is now the world’s richest, ousting the U.S. from its long-held first-place position. Since 2000, global wealth has grown $358 trillion to $514 trillion with China making up $113 trillion of that growth, or nearly a third of the total.

According to the China Macro Economy news site, China’s middle class is growing quickly, now numbering between 340 million and 400 million depending on the specific estimate. The government is attempting to widen this group this further through its policy initiatives with possible middle-class numbers reaching 500 million in four years and 750 million by 2035. Even if this central planning falls short, it’s clear Missfresh has plenty of potential customers and is adding more daily.

While this growth is an indirect, “rising tide lifts all boats” factor, other state initiatives might benefit Missfresh more directly. During the third-quarter earnings call, Xu discussed “digital acceleration in the neighborhood retail industry especially in fresh produce […] and rising popularity in online retailing,” which he attributed to Beijing’s “efforts to promote consumption upgrades.” While it’s unknown whether the policies themselves or organic demand from increased affluence is the real driver, at a minimum, the Chinese state isn’t putting roadblocks in Missfresh’s way.

3. Its metrics are mostly positive, or improving

So far, Missfresh’s strategies and the favorable environment it’s operating in appear to be adding up to financial success. While past performance isn’t an infallible guide to what the future has in store, third-quarter net revenue jumped 47.2% year over year to $329.3 million. The number of orders filled increased 34.4%, while the value of each individual order was up 5.2%, averaging $13.70. Revenue gains beat not only Wall Street’s predictions but management’s own internal estimates.

One area of concern is earnings, which continue to be negative. The latest adjusted net loss of $137.6 million was flat quarter over quarter, but it nearly doubled from the same period last year. Gross margin was also down from 16.6% to 12.3% year over year because of discounts and incentives offered to shoppers. Revenue growth came at the cost of a decline in profitability. Gross margin did improve quarter over quarter, however, with a 480 basis point gain. The company clearly still has work to do at the bottom line, but it’s at least seeing some progress while beating analysts’ earnings per share estimates solidly.

Missfresh’s share value has slumped since its IPO earlier this year. The stock trades at less than half of its IPO price, but it’s on the upswing again. With all the factors it has stacked in its favor, including its unique “dark store” model of on-demand delivery, Missfresh seems likely to continue growing. With rebounding margins, it’s possible the company could avoid the scaling problem of dedicated food delivery services and achieve positive net earnings in the near future. This outside-the-box Chinese food delivery stock has a bullish outlook, though investors should still be cautious in their approach.

This article represents the opinion of the writer, who may disagree with the “official” recommendation position of a Motley Fool premium advisory service. We’re motley! Questioning an investing thesis — even one of our own — helps us all think critically about investing and make decisions that help us become smarter, happier, and richer.